Debunking the Fiber is Faster than Coax Myth 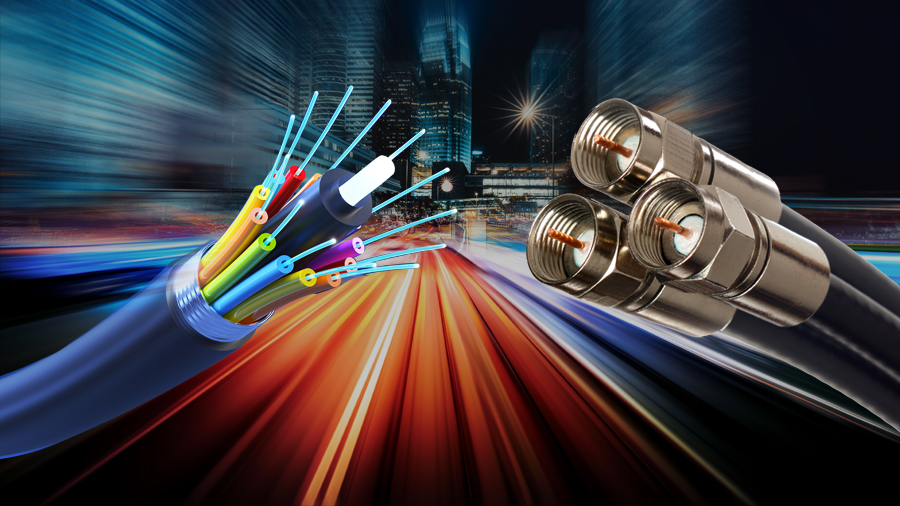 When it comes to the evolutionary path of the HFC network, all roads lead to fiber, a broadband transmission medium offering almost limitless bandwidth. That’s the reason cable operators routinely — and almost exclusively — pull PON technology out of their toolboxes when it comes to greenfield buildouts.

Fiber, vis-à-vis coax, has a lot going for it, including the ability to blast data over longer distances with little or no amplification. An end-to-end fiber network, which is by nature passive, is also likely to require less operational overhead than a coax plant.

But as fabulous as fiber is, the popular perception that an FTTH-based broadband service is appreciably faster or more responsive than an HFC-based one is, well, a misperception. The reality is that opting for a FTTH service over an HFC offering probably isn’t going to make your Zoom calls more meaningful or your Call of Duty chops more admirable to fellow gamers.

“So, the correct response to the which-is-faster question, without doubt or caveats, is coax, at the moment.”

From a marketing perspective, FTTH service providers, which are currently offering 1Gbps, or even multigigabit, symmetrical services, hold an advantage of MSOs. But it’s an advantage with no practical benefit at the moment. Few if any residential subscribers are coming anywhere close to stressing out 1Gbps pipes, regardless of the number or sophistication of the applications running over their network connections. If your car can reach speeds of 150 miles per hour, are you going to get to the grocery store any faster with one capable of 200mph — or 500mph?

Will businesses and residential subscribers eventually require multigigabit broadband services? Absolutely. But that future is still years, if not decades, away, more than enough time for cable operators to boost their HFC networks into the symmetrical multigigabit class by upgrading to DOCSIS® 4.0.

A Look at Latency

And then there’s the other type of speed measurement, latency, which might be even more important in terms of network performance and responsiveness. Latency is basically the amount of time it takes information, such as a command or request, to make a trip across the Internet and back. For gamers, latency, or low latency, is literally the name of the game. Any appreciable delay between twitching your finger and firing your machine gun means you’ll soon be pushing up virtual daisies.

That’s why latency is arguably the more meaningful measurement of broadband performance. Plus, it is something you can actually measure with a stopwatch, albeit a very precise one. If you’ve got one that’s calibrated in milliseconds, you would be able to easily verify that you’re in big trouble if more than 100ms elapse between a Call of Duty® request and its corresponding action.

So, which do you think is the faster medium — fiber or coax — when it comes to latency?

No one will blame you for going with fiber, which sends data in pulses of light. Nothing, at least in this universe, travels faster than the speed of light, right? And if your instincts are to Google the answer, you’re likely to come up with something like this:

“Because information travels through fiber cables at the speed of light, that delay is exponentially less: an average of 17 milliseconds (ms), compared to 100ms with cable internet.”

That bit of wisdom comes from a May 2020 article posted on the WhistleOut website. It sounds logical, even convincing. But as any physicist, or network engineer, can tell you, it’s inaccurate.

Information does not travel through fiber cables at the speed of light. In a glass encasing, light is subject to something called a refractive index, which reduces the speed of light by roughly 33% from how fast photons would travel in a vacuum. So, when you actually put a stopwatch to how long it takes RF signals to propagate through fiber optic cable, you get a reading of roughly 67% the speed of light. That’s an impressive, faster-than-you-can-blink, kind of speed.

But there’s one thing that’s even faster, and that’s how quickly you can move that same information through a coax cable. That’s right, RF signals move through coaxial cable at about 87% the speed of light. So, the correct response to the which-is-faster question, without doubt or caveats, is coax, at the moment.

Scientists are working on reducing latency in fiber by lessening the impact of refraction, with so-called hollowcore fiber being on the forefront of those efforts.

The good news is that the cable industry is working diligently to reduce latency in the HFC network, efforts that are captured in CableLabs’ Low Latency DOCSIS specification, which is part of the overall DOCSIS 4.0 specifications. The bottom line is that when all other contributors of latency are eliminated, or at least minimized, information will travel faster in coax than in a fiber. And that’s a fact that will still be true 20 years, or even 100.

Cable operators recognize that fiber is the future. And they are gradually migrating toward an all-fiber network, but at a pace that allows them to maximize the massive investments they’ve already made in millions of miles of coax plant. That transition, for many MSOs, could take 20 years or more. In the meantime, when it comes to speed, as measured by Gbps or latency, cable operators can proudly and rightfully claim that they can go toe-to-toe with FTTH providers.