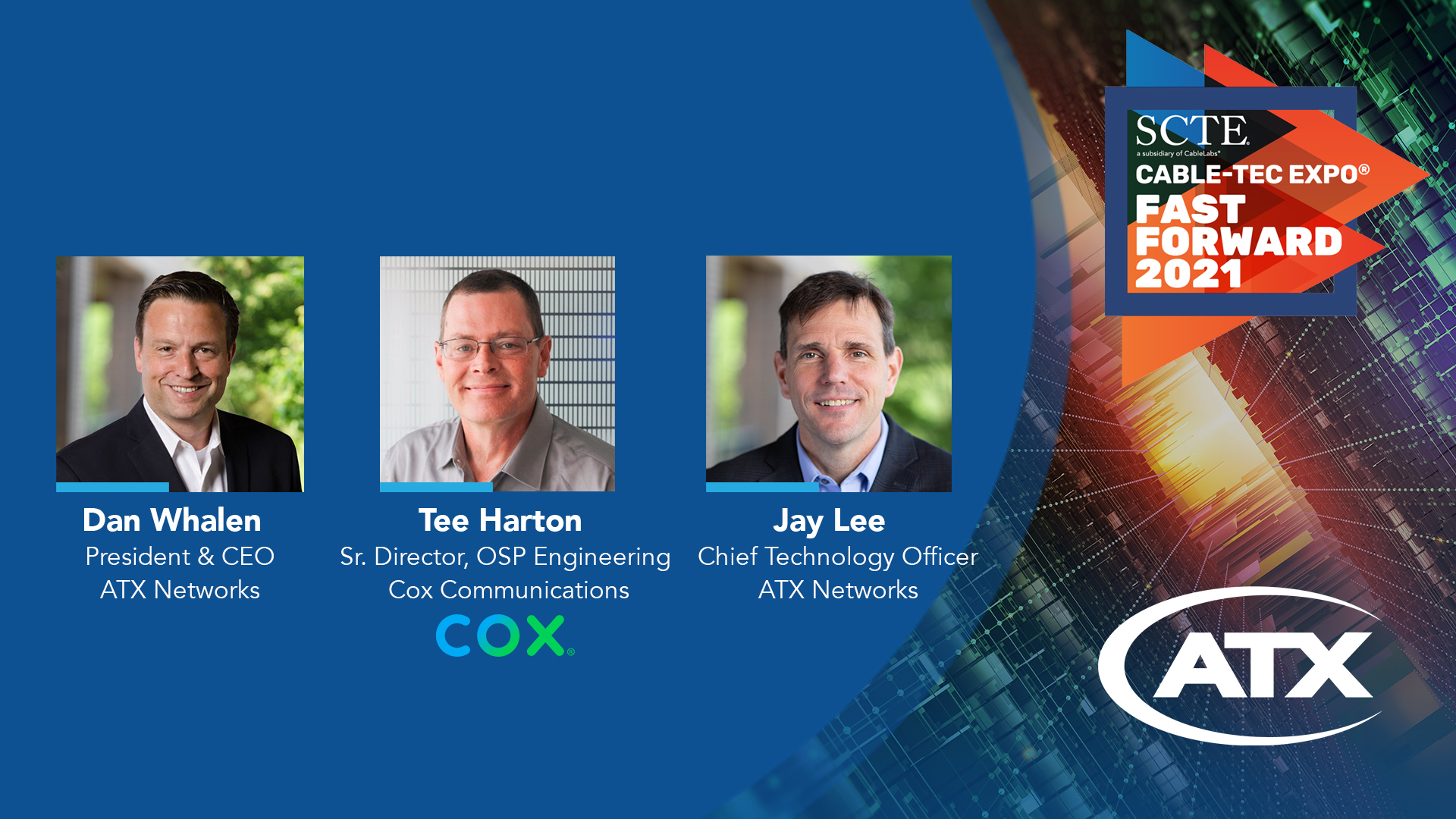 “There’s still a long way to go but it’s a relatively straight-forward chain of events that we’ve been through many times,” said Tee Harton, Senior Director of OSP Engineering at Cox Communications, describing the industry’s eventual adoption of the extended spectrum version of DOCSIS 4.0 at this month’s SCTE Cable-Tec Expo.

Harton shared his insights on how Cox and the larger cable industry are preparing to extend the usable spectrum of the HFC network to 1.8GHz during an ATX-hosted fireside chat entitled Navigating the Journey to DOCSIS 4.0, which also featured ATX’s CEO Dan Whalen and CTO Jay Lee. The 30-minute presentation, now available on demand, provided Cable-Tec Expo attendees with a behind-the-scenes accounting of how an ecosystem of RF experts are working in unison to enable MSOs to transition to the next version of the DOCSIS standard as seamlessly and cost-efficiently as possible.

The session’s most dominant theme was how hard cable operators, technology suppliers and component makers are collaborating to make the move to 1.8GHz as easy as possible. Harton, whose team at Cox is primarily charged with the architecture and upfront engineering of Cox’s outside plant deployments, said he’s impressed with the level and sophistication of cooperation he’s seeing across the ecosystem.

“It’s been a good collaboration,” says Harton, who has spent his entire career in the cable industry, splitting his time on the vendor and service provider sides. “A lot of work has gone into making sure that when we get there, we’re all happy with where we are.”

Much of that satisfaction, explained Harton, stems from being able to upgrade the speed and reliability of the existing infrastructure without a major rebuild of the network. Harton is hopeful that Cox and other MSOs can deploy 1.8GHz-capable actives into the network largely through drop-in upgrades, which allow cable operators to leverage existing spacing and already in-place structures.

“It looks like, at least from the initial work that’s being done on the amplifier specs, that that’s going to be possible,” says Harton, referring to drop-in upgrades. “We’re looking more around the traditional amplifier upgrade, with some booster amps where necessary, to achieve 1.8 with DOCSIS 4.0.”

In terms of timing and the sequence in which outside plant components will be integrated into the network, Harton suspects that taps and passives will be the first 1.8GHz-capable devices deployed. He noted that 2GHz hardline passives, including ATX’s GigaXtend XS Series taps and passives, are now commercially available, and that Cox is investigating when it makes the most economic sense to begin to replace failed devices with next-gen devices. He cited a recently published cost analysis study from ATX that recommends the immediate adoption of 1.8GHz taps as helpful to Cox’s research on the topic.

Next in line, says Harton, will be actives, which he estimates will be available at roughly the same time as additional DAA equipment that supports DOCSIS 4.0.

I think it’s an exciting time for the industry as we transition to DOCSIS 4.0. There are some exciting capabilities coming to a node near you.

“In the next year or two we’re going to be looking at a complete suite of hardware that you can go into a deployment with,” says Harton.

Harton also acknowledged that significant work still needs to be accomplished to ensure a smooth and optimal adoption. In the presentation, he cited figuring out how to power the upgraded network without having to make major changes to the existing plant as a critical challenge and one that could impact both the cost and timing of evolving the HFC network.

Regardless of potential challenges on the road ahead, Harton is confident of the HFC network’s continued longevity, estimating that it will still be serving subscribers more than 20 years into the future.

“It’s hard to argue with an installed network,” added Harton, referencing the massive amounts of coax now bringing services to millions of homes and businesses. “At the end of the day, it’s hard to argue with something that’s already there, already delivering services, with a technical path to continue to meet the demands of the customer base hanging off of that network.”

Throughout the course of the presentation, which can be viewed in its entirety here, Harton maintains his optimism and enthusiasm for the future of the cable industry and its ability to continue to meet subscriber requirements for speed and reliability.

“I think it’s an exciting time for the industry as we transition to DOCSIS 4.0,” he said. “There are some exciting capabilities coming to a node near you.”