Bandwidth-consumption demands have exploded over the past few years. More and more consumers are pulling down content from Netflix and other OTT services that stream movies and television programs in perpetually escalating — and bandwidth-robbing — resolutions, including Ultra HD (UHD). On the upstream side, interactive gaming and around-the-clock feedback from millions of IoT devices and sensors are also contributing to the need for service providers to position their networks to deliver gigabit-class access services by moving to a distributed architecture that leverages highly efficient digital optics.

The transition from a centralized architecture to one that distributes many of the functions now located in headends or hubs to the far reaches of their networks creates numerous opportunities for MSOs. By moving RF generation and other functionality into the outside plant, for example, cable operators can reap significant performance and operational efficiency benefits. Replacing analog optics with digital Ethernet optics at the headend significantly increases fiber efficiency and improves signal performance. It also sets the stage for the virtualization of capabilities and functions remaining in the headend, providing cable operators with the opportunity to eventually move to a datacenter model through the replacement of purpose-built equipment with commercial-off-the-shelf (COTS) servers.

But current economic conditions and intense competitive pressure require service providers to evolve their networks in affordable increments that allow them to preserve much of their existing investment and avoid wholesale equipment replacements or major new fiber installations. Cable operators require solutions that enable them to optimize the capacity of their current fiber plant, while reducing maintenance and operational costs. MSOs are moving toward DAA cautiously, given the financial risks associated with investing in new technologies or architectures, that means any viable DAA solution must also be futureproof, allowing cable operators to seamlessly accommodate new technologies as they are introduced.

ATX’s Agile Innovation approach to DAA enables MSOs to alleviate much of the risk associated with technology migrations by delivering solutions with the flexibility to navigate the unanticipated twists and turns of any network evolution. ATX’s GigaXtend™ family of hardline taps and passives, for example, provides cable operators with the assurance that their outside plants will be relevant for decades to come. The industry’s first 2GHz taps and passives, upgradeable to 3GHz and higher through a simple faceplate exchange, GigaXtend enables MSOs to replace their hardline passives today and not have to worry about making major alterations to their coaxial capable plant as they navigate through upgrades to DOCSIS® 4.0 and eventually Extended Spectrum DOCSIS® (ESD) in the years ahead.

ATX also designed its GigaPass™ is an RF R-PHY video engine optimized to accelerate DAA adoption by enabling MSOs to go forward with R-PHY node deployments while working out some of the complexities of building a CCAP video core. ATX designed the GigaWave™ Digital Link Extender (DLX), a next-generation digital optics platform, to enable cable operators to gracefully transition to a distributed architecture. A highly efficient and integrated solution, Gigawave DLX enables MSOs to dramatically expand the capacity of access links, migrate to a Remote-PHY/MAC architecture, push RF generation deep into the network and replace expensive hubs. 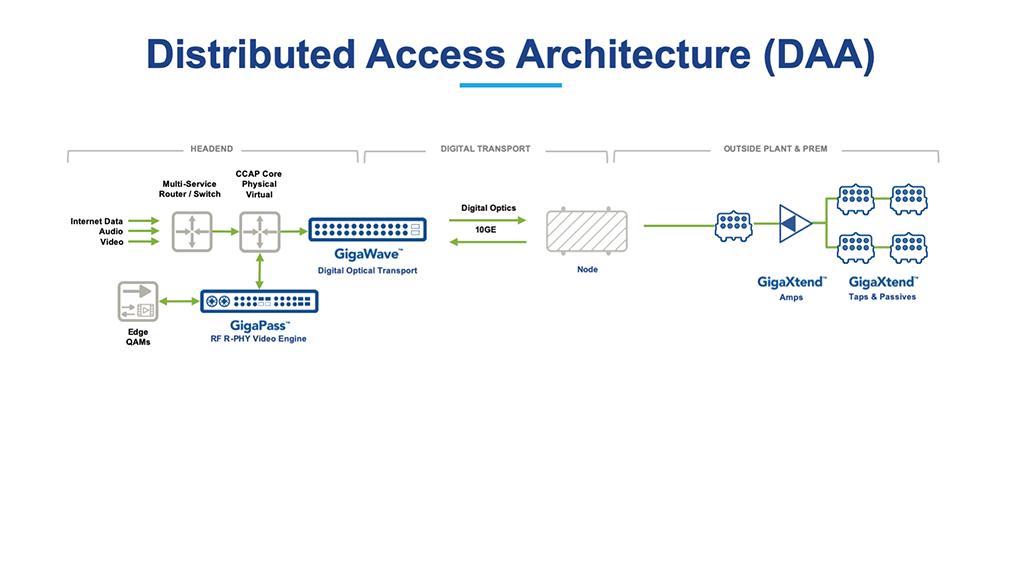 Blog: DAA on the Horizon

What Factors are Contributing to DAA and other Deployment Delays?

Understand why MSOs must adopt an Agile Network Model to achieve the flexibility and efficiency required to meet future market demands and keep ahead of the competitive curve.