GCI Teams With ATX Networks to Prep Outside Plant for DOCSIS 4.0 and 10G 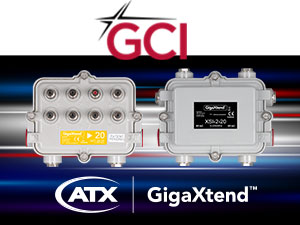 TORONTO, June 23, 2022 – ATX Networks, a global leader in broadband access and media distribution solutions, is providing GCI, Alaska’s largest broadband operator, with its GigaXtend™ XS family of 2GHz taps and passives. By deploying DOCSIS® 4.0-compatible taps and passives today, GCI is able to support its immediate goals of extending the current HFC network to 1.2GHz, while eliminating the need to again replace passive devices in its outside plant when the cable operator makes the transition to the FDD version of the DOCSIS 4.0 specifications, which support a frequency of 1.8GHz.

“GCI is fully committed to providing Alaskans with the highest-performing and most affordable broadband services available anywhere,” said Victor Esposito, Vice President of Engineering & Architecture at GCI. “Working with ATX to deploy taps and passives that will support multigigabit services, while significantly reducing operational costs by compressing two upgrade cycles into one, assists us in reaching both of those goals.”

Headquartered in Alaska, GCI has emerged as one of the most forward-looking cable operators in North America, publicly committing to putting its HFC network on a path to deliver 10Gbps services to subscribers. GCI has been providing communication and technology services to some of the most remote and geographically challenging communities in the U.S. for more than 40 years. Its network, a mix of fiber, microwave, and satellite technology, reaches 97% of Alaska’s population.

ATX’s GigaXtend XS 2GHz taps and passives, with platform support beyond 3GHz, were the first commercially available and deployed Extended Spectrum passives in the cable industry. The devices, which were recently featured in a CableLabs-sponsored DOCSIS 4.0 FDD lab test demonstrating downstream speeds of nearly 9Gbps, enable cable operators to fully realize the speed and bandwidth potential of DOCSIS 4.0. GigaXtend XS technology is a critical enabler of GCI’s ability to eventually deliver services on its HFC network that fulfill the promise of the CableLabs 10G initiative.

“GCI understands the performance and operational benefits of futureproofing its network for the eventual delivery of multigigabit symmetrical services,” said Jay Lee, Chief Technology Officer at ATX. “ATX is pleased and proud to be supporting GCI’s mission to bring world-class digital connectivity to some of the most remote communities in North America.”

GCI started taking delivery of GigaXtend XS taps and passives, including an extensive portfolio of couplers, splitters and power inserters, earlier this month, with initial installations scheduled for late Spring.

ATX Networks is a global leader in broadband access and media distribution solutions. ATX’s market-leading and award-winning solutions are based on Agile Innovation design principles, enabling communications service providers to futureproof and evolve their networks in lockstep with market demand. ATX partners with the world’s most innovative cable, satellite, fixed telecom, wireless and media broadcast service providers to improve people’s lives by enabling affordable and reliable broadband connectivity and media content for everyone, everywhere. For further information, visit ATX at www.atx.com, and follow us on Twitter @ATXNetworksCorp.