The Digital Divide is Wider (and Deeper) than you Think 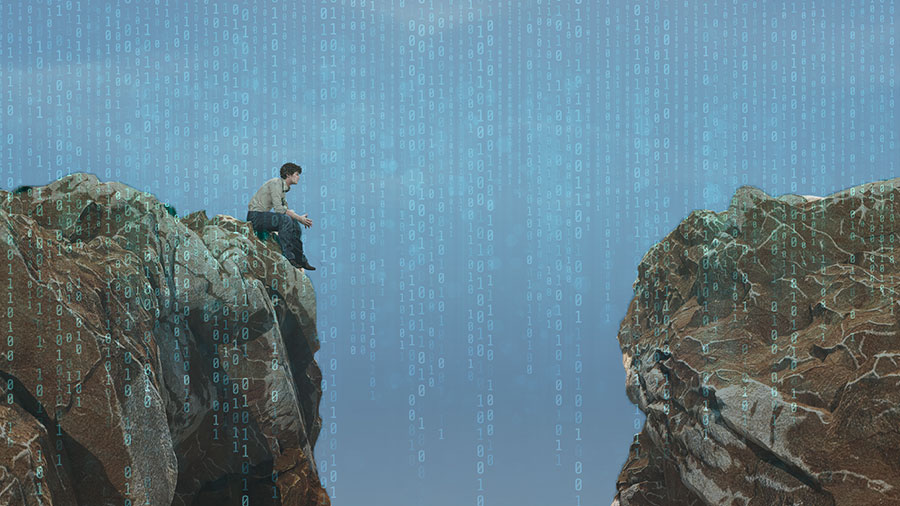 The Digital Divide and efforts to overcome the disparity in broadband services available to urban and rural communities through government subsidies have been much in the news recently. Just a few weeks ago, ATX’s CEO Dan Whalen penned a blog post highlighting the importance of the Rural Digital Opportunity Fund (RDOF) and other initiatives to extend the reach of high-speed broadband to underserved areas.

It doesn’t take a sociologist to recognize that huge chunks of our daily existence are steadily transitioning to the digital realm. We already rely heavily on broadband for doing work, communicating, education, medical diagnosis and treatments, dating — you name it. And as that dependency increases, the applications that empower our virtual lives will continue to grow in sophistication, meaning that they will require increasingly speedier and lower latency broadband connections to deliver the intended experience.

Earlier this year my youngest son started a job, remote at first, that requires a broadband connection that exceeds the capabilities of most services currently available to huge swaths of rural customers. Had he not had access to a hearty enough service, his start date would have been pushed back to the reopening of the physical office. My son’s experience is anecdotal. But I don’t think it requires a great deal of data or imagination to recognize that the situation is only going to get worse, and that workers plugged into anemic broadband services will no longer be able to keep pace with remote colleagues using conferencing and collaboration tools designed for bandwidth streams that deliver services at speeds of several hundred megabits a second or even faster.

But the dangers of the widening Digital Divide go much deeper than the workplace. Consider healthcare. The pandemic and related lockdowns have cast a spotlight on the potential of not just diagnosing and monitoring patients remotely, but also administering treatment. Billions are already being poured into research related to the development of immersive environments that would essentially enable a doctor and other healthcare workers to diagnose and treat a patient as if she were in the same physical space.

These high-tech telemedicine applications, which rely on light field and other bandwidth-voracious technologies, are not that far from the mainstream and are often included as examples of the types of applications made possible by CableLabs’ 10G initiative. So, is it crazy to suggest that within five years, certainly 10, the speed and latency of a subscriber’s broadband connection could determine his access to the most sophisticated healthcare available?

But there’s another facet to the Digital Divide that cable operators may have to grapple with in the not-too-distant future. Right now, the Digital Divide is synonymous with speed disparities between urban and rural subscribers. It might not be that long, though, until digital haves and have-nots reside just a few blocks from one another. Most cable operators, especially those with hundreds of thousands or more subscribers, must upgrade their HFC networks in increments. Where they target those upgrades is often dictated by the bandwidth demands of their heaviest users. What happens to subscribers in service areas that are not among the first in line for upgrades but have a need, perhaps employment based, to run the most sophisticated applications available?

Suddenly, the Digital Divide is running through the heart of the network, instead of at its outskirts. More alarming is that if the speed and bandwidth disparity among a cable operator’s subscribers is too great it could open up poaching opportunities for competitive providers, such as those offering faster services, like the 1Gbps symmetrical services currently offered by most FTTH providers.

“The point is that the Digital Divide has the potential to not only expand significantly over the next few years, but to engulf a much larger proportion of the subscriber universe than it currently does.”

Meet me on the Holodeck

Or maybe the future threat comes from wireless service providers?

The expectations for advanced applications using 6G wireless are off the charts. Look at this recent white paper from the University of Surrey, which describes a flurry of space-age-worthy applications, including transporting, that are conceivable in a 6G realm. While no one is going to succeed at getting Scotty to beam you up anytime soon, the lifespan of a generation of wireless technology is traditionally about 10 years. Given that 5G is already a couple of years old, cable operators may need to contend against 6G-powered applications as early as the middle of the next decade.

The point is that the Digital Divide has the potential to not only expand significantly over the next few years, but to engulf a much larger proportion of the subscriber universe than it currently does. If cable operators are to avoid competitive fallout from future broadband disparity, it is imperative they immediately start planning an HFC evolution strategy that keeps as many of their subscribers on the right side of the Digital Divide as possible.

It’s difficult to pinpoint when it happened, but at some point over the past few years broadband crossed over the “good to have” threshold and is now an essential and influential component of cultural and societal advancement. Similarly, the negative repercussions resulting from inequities in broadband access have significantly intensified.

The dividing line between the digital haves and have-nots is no longer primarily about the resolution of streaming media content or how quickly you can conduct an online transaction or post a 256-character opinion. Today it’s about equal employment and educational opportunities. Tomorrow it could be about who receives life-improving — or even life-saving — medical services and who doesn’t.

The cable industry, since the introduction of DOCSIS® technology, has been the premier provider of broadband services on the planet, rising to the occasion again and again to meet the bandwidth demands of millions of subscribers. No one knows broadband like the technologists employed by cable operators.

And that’s all the more reason why the cable industry should take a leading role in addressing the Digital Divide and all its implications — starting today.