When will 10G of Bandwidth Not be Enough?

OK, so that’s a trick question. Nobody, short of Nostradamus or even Achilles the Cat, can predict with any certainty when a 10Gbps pipe will lack the heft that subscribers will require to effectively participate in the digital environments they desire.

What’s certain, though, is that a 10Gbps connection, the next major milestone for downstream data transmission, will eventually run out of steam. That’s just an ironclad inevitability. Bandwidth belongs in the same category as friends and money, you can never have too many or too much of either – and both will eventually be in short supply.

If not a precise date, maybe we can assign a rough timeframe to when the industry goal of 10G might start running out of gas. Considering the types of applications that are projected to go mainstream in just a few years, like deeply immersive virtual spaces that resemble holodecks, it’s not off the wall to speculate that 10G could be on fumes as early as the second half of the decade.

Let Them Use Fiber

Just a couple of years ago, most MSOs would have shrugged at the above suggestion. So what if capacity demands exceed 10Gbps in the next decade or so? By that time, the conventional wisdom went, MSOs would have migrated a substantial enough percentage of their HFC networks to all-fiber to provide the extra bandwidth their heaviest users would be demanding.

But MSOs are now rethinking those calculations, prompted mostly by the higher-than-expected costs of fiber deep installations, let alone stringing fiber all the way to businesses and residences. Add to that the logistical realities — such as a lack of skilled labor and nearly impossible-to-navigate permitting requirements — and many MSOs, even those with adequate budget, start to question if they could make even a small dent in the conversion of millions of coax-connected end points to fiber in the next few years.

That turns out to be a big deal, as well as a major competitive risk.

That’s because cable subscribers attached to HFC networks that begin to run short on bandwidth in the not-too-distance future will have other options. Fiber-only service providers now have access to PON technology capable of delivering 25Gbps services, with additional capacity increases only a few years away. MSOs, preeminent suppliers of broadband services for the past 30 years, face the potential of being hit with significant subscriber defection if a sizeable number of users are compelled to jump to alternative providers to meet their beyond-10Gbps bandwidth needs.

“Fiber-only service providers now have access to PON technology capable of delivering 25Gbps services, with additional capacity increases only a few years away.”

Mitigating that risk is at the heart of ATX’s 2050 Project, a long-term HFC evolution initiative, which you can explore in depth here. The 2050 Project was launched to assist MSOs with the incremental expansion of frequencies on their outside plants, essentially buying them more time to migrate a critical mass of subscribers to fiber connections. Essential to that initiative is ATX’s GigaXtend™ Outside Plant portfolio, the industry’s only end-to-end family of next-gen actives and passives designed to enable cable operators to upgrade their HFC networks, beginning with 1.2GHz, in the least disruptive and operationally efficient manner possible. 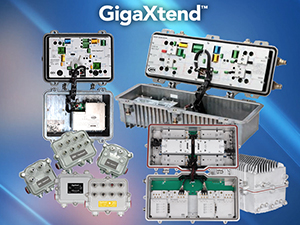 The need to protect their competitive standing through continued expansion of their HFC networks is now resonating with MSOs. Instead of gambling that maxing out their HFC networks at 10Gbps will be enough to retain broadband leadership throughout their migrations to all-fiber, MSOs are beginning to put together strategies that will enable them to inject their HFC networks with incremental frequency increases if, or more likely when, market conditions require. Given that a 25Gbps service, which will likely require a spectrum jump to 3GHz on coax plants, is the next broadband service plateau, MSOs are starting to take serious the need to make sure all outside plant upgrades offer a cost-efficient path to 3GHz or higher.

We’re no Nostradamus, but ATX is working hard to stay on top of how quickly bandwidth demand is accelerating and to track the dynamics of the digital transformation that are likely to influence the online landscape of the coming decades. Technologists say we’ve already entered what is being called the Fourth Industrial Revolution, where bandwidth becomes a utility, like electricity and water, and the workforce is transformed through robotics and other forms of artificial intelligence. 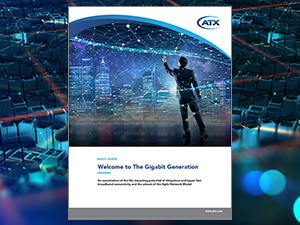 Entire industries, including medicine and education, are being reinvented in a digital realm, a transformation that is only going to accelerate now that thousands of businesses over the past few months have dipped their toes into the Work From Home (WFH) waters. Face-to-face encounters are becoming increasingly virtual, from business meetings to doctor visits. Count on applications that improve that experience — and consume buckets of bandwidth — jumping to the front of the funding trough over the next few years.

Though the mid-century mark seems far into the distance, 2050, which will be marked by monumental advances in the way we work, do business and communicate, will be here before we know it. It just makes good sense to start planning today. When 10G runs into a wall, whenever that might be, it’s imperative that cable operators have made every effort to keep all of their subscribers satisfied.