Why Cable Operators are in ‘Good Hands’ with DOCSIS

Recent news cycles have been dedicated to the debate over whether cable operators should continue investment in their HFC networks or instead ditch their DOCSIS® ambitions in favor of some flavor of Fiber-To-The-Home (FTTH) technology. Any declaration of support for either approach, like this one, is treated as a potential bellwether for the larger cable industry.

The reality, of course, is that nearly all cable operators are already engaged in a transition from coax to fiber. You could even argue that the coax-to-fiber conversion commenced decades ago, with the introduction of HFC technology into their networks. The fact that end-to-end fiber is the endgame for cable operators is undisputable, and is underlined by the near-unanimous preference of PON technology for greenfield buildouts of cable networks.

So, the big question facing cable operators isn’t if they should cap their investments in DOCSIS and move to FTTH, but when.

But that question, of course, is fraught, and dependent on a flurry of variables, which are, as variables tend to be, in constant flux. Just a few years ago, the answer to the Big Question seemed to be now. A couple of Tech-Expos ago both operators and technologists were openly questioning the need for actives that exceeded spectrum ranges of 1.2GHz, which likely contributed to a pause in the development of next-generation HFC amplifiers.

Fast forward a couple of years and the attitude about future investment in HFC has changed dramatically, culminating in the 2019 release of the DOCSIS 4.0 specification, which includes provisions for increasing HFC spectrum to 1.8GHz. So, why the re-evaluation? How had conditions changed between roughly 2017 and 2019?

Blame those pesky variables, which include fiber construction costs, construction timing, customer demand and competitive threats, among other factors, such as the size of the cable operator’s subscriber universe. Cable operators must constantly monitor these variables, often triangulating between costs, timing and competition, to come up with a "best-guess" projection of how they can most effectively manage their HFC-to-FTTH transitions without burning through budget too quickly and without falling behind competitors.

Ironically, cable operators may have turned up the heat on themselves with the introduction of the 10G initiative in January 2019. The ambitious program, which calls for the availability of multi-gigabit symmetrical services in a few years and was meant to be a competitive gauntlet aimed at fiber and 5G providers, also put pressure on CableLabs’ constituents to up the speed of their networks.

PON and other FTTH technologies, as mentioned previously, are viable choices in cable operators’ toolboxes for expanding the bandwidth of their networks. But many MSOs operate massive coaxial plants, which will likely take decades to fully replace with fiber – even if cable operators were blessed with unlimited budgets. And that’s why DOCSIS 4.0, non-existent a couple of years ago, is turning out to be such a godsend now. It offers cable operators a relatively fast and hassle-free way to boost the speed and bandwidth of their HFC networks, buying them critical time to carry out their FTTH migrations.

You could argue that DOCSIS 4.0 has become even more critical to the competitive interests of cable operators over the past six months. Billions of dollars in public funding to expand broadband, mostly through FTTH initiatives, have been proposed since the end of last year. This massive influx, which few saw coming, is likely to accelerate the mainstream availability of gigabit, or even multi-gigabit symmetrical services.

In a way, DOCSIS is a giant insurance policy, giving cable operators peace of mind that they have the capability to adjust to any unforeseen changes in those pesky variables and to evolve their networks in lockstep with customer demands and competitive pressures

Do subscribers, especially residential ones, currently require gigabit-plus broadband? The answer to that question is a definitive “no,” of course. But perception is everything and cable operators are fully aware of the hole they might be in if competitors are able to market their services as faster and more futureproof. That’s an issue — if proposals for public funding fuel an acceleration of FTTH buildouts — that MSOs will need to deal with several years ahead of what they were planning.

And that’s the beauty of the HFC network, a proven and powerful infrastructure that can be upgraded relatively quickly and painlessly, with most cable operators able to up the spectrum of their outside plants without respacing the millions of actives and passives in their networks. In a way, DOCSIS is a giant insurance policy, giving cable operators peace of mind that they have the capability to adjust to any unforeseen changes in those pesky variables and to evolve their networks in lockstep with customer demands and competitive pressures.

That’s especially beneficial to MSOs given the fact that, for most, their HFC-to-FTTH transitions are going to take decades to complete. In an HFC evolution survey we conducted at the beginning of the year, ATX asked cable industry professionals representing operators with more than a million subscribers to estimate how long it would take their companies to fully replace their HFC networks. 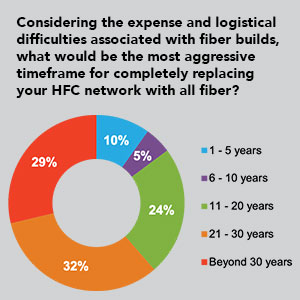 More than 60% of respondents said their networks would still be supporting subscribers hooked up to coax infrastructure for at least the next 20 years, with half estimating that their HFC-to-FTTH transitions would extend past 2050.

ATX launched the 2050 Project initiative in 2020, primarily to encourage our customers to take the long view of the evolution of their HFC networks. Nobody can predict the future, and those pesky variables, like construction costs, timing, customer bandwidth requirements and competitive threats, are likely to ebb and flow dozens of times over the next decades, prompting MSOs to take advantage of the power and flexibility of their HFC networks as needed.

At some point in the future, maybe a decade or two from now, cable operators may be facing a decision point similar to the one they are looking at now. It’s just too early to say for sure if DOCSIS 4.0 will mark the last spectrum boost cable operators will need to make to their HFC networks. But however it turns out, cable operator executives can take comfort in knowing they are protected by the agility of their network and the adaptability of DOCSIS.

Like any good insurance policy, you hope you never need it. But it’s a huge load off one’s mind knowing it’s there if you do.